City officials and other proponents claim the use of POBs will reduce the City’s pension liability and enable the City to fund future obligations. They also claim that the City will face financial disaster if Proposition A is not approved by the voters.

But financial disaster won’t come from a rejection of the POBs. The financial disaster has been in the works since 2001, beginning with the passage of major revisions to the pension plans during the Lee Brown administration. The changes recently negotiated by Mayor Turner, with support from Lieutenant Governor Dan Patrick and a host of other “conservative” Republicans, are not really reforms. It’s just another way to extend the problem into the future and pretend it has been resolved. Gary Polland writes about the bonds as well-

(1) The recently adopted 2017 budget had a projected deficit of $160 million and it was closed by diversion of pension payments, layoffs and by one-time fixes.

(2) The proposed bonds will cost the city about $75 million a year to payoff principle and interest, and the city has no plan of how to pay them off without a tax increase. See below for the language for the bonds: 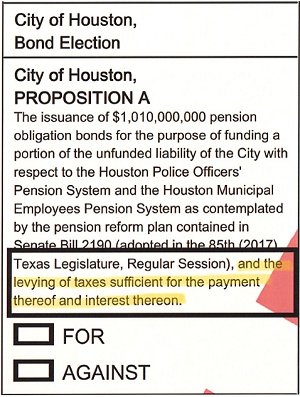 (3) Finally and most critically, the bonds are spending the grand total of ZERO on flood remediation and control, which is by far the most critical issue facing the city.

There is a PAC at work in opposition to the bonds led by Bruce Hotze and others. Bruce is right to fight the bonds because sure as we are sitting here if Proposition A passes it will be the excuse to lift Hotze’s revenue cap that the Mayor Turner bemoans everyday.

Early voting started Monday and the election is to be held on November 7th. Take 10 or 20 of your friends with you and go vote.